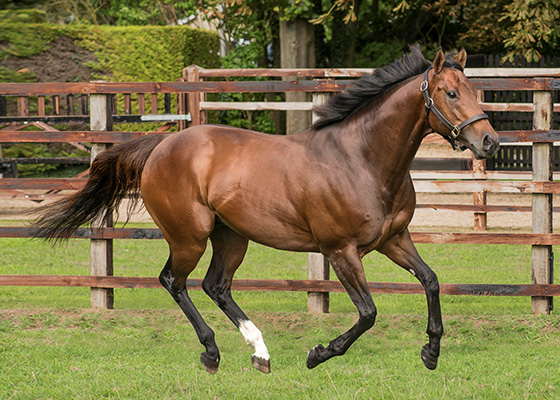 For a number of years now, breeders in Europe have been in need of an outcross sprinter/miler stallion to complement the so successful sire lines of GALILEO and sire descendants of DANZIG. To fill this requirement, Lanwades has stood the Champion sire SELKIRK (17 Gr.1 winning progeny) and KINGMAMBO’s highly regarded son ARCHIPENKO, a Gr.1 producing sire in his first crop.

It gives us great pleasure to introduce a new alternative for the European Thoroughbred Industry: Kentucky-bred BOBBY’S KITTEN who, albeit a sireline descendant of the legendary SADLER’S WELLS, fulfils the outcross role so seriously needed here.

KITTEN’S JOY, sire of BOBBY’S KITTEN (and his 3yo own-brother, CAMELOT KITTEN, at the time of writing the Champion-Elect Turf Colt of 2016 in the USA) has been the Champion Turf sire in the USA for five seasons, including the current one. Sire of 72 Stakes winners, his scant representation in Europe includes 2016 Gr.1 winner HAWKBILL and Gr.3 winner TAAREEF. A product of Mr and Mrs Kenneth Ramsey’s Ramsey Farm, KITTEN’S JOY was the Eclipse Award Champion Turf Horse of 2004 and is now recognised as one of the world’s leading sires, commanding a fee of $100,000 in 2016. His own sire EL PRADO (Champion 2yo in Ireland) was by far the best sire son of SADLER’S WELLS in the Americas, siring Champions MEDAGLIA d’ORO, ARTIE SCHILLER and SPANISH MOON.

The dam of BOBBY’S KITTEN, CELESTIAL WOODS, was an able racemare, winning 3 races in the USA. At stud she has been extraordinarily successful in her ongoing liaison with KITTEN’S JOY, to whom she has produced Graded Stakes winners BOBBY’S KITTEN, CAMELOT KITTEN (Champion-Elect Turf Colt in 2016) and SW MAJOR MAGIC; she also has a 2yo and yearling (both colts) plus a filly foal, all by the same sire. Her sire, FORESTRY, is consistently amongst the leading broodmare sires in the USA and this year is represented as such by the outstanding Champion 3yo NYQUIST. CELESTIAL WOODS’ granddam NORTH OF EDEN was also the dam of PARADISE CREEK (Gr.1 Washington DC International S, Gr.1 Arlington Million S, etc) as well as further Gr.1 winners WILD EVENT and FORBIDDEN APPLE. Irish-bred, she was a half-sister to Champion THEATRICAL (six-time Gr.1 winner; Eclipse Champion Turf Horse, successful sire) and to the dam of DAVID JUNIOR (dual European Champion).

BOBBY’S KITTEN’s notable affinity for turf racing, marvellous temperament and outstanding physique, together with his outcross pedigree, will make him a good match for the majority of European mares. He will be strongly supported at stud by Ramsey Farm and Lanwades Stud, as well as by a number of Europe’s leading breeders. We invite all interested breeders to view BOBBY’S KITTEN, by appointment, at Lanwades.