LADY JANE DIGBY takes the Gr.1 Grosser Dallymayr-Preis in 2010. Earlier in the season she had won the Listed Warwickshire Oaks and finished 3rd in the Gr.2 Lancashire Oaks. Previous to this she had won the Gr.3 Walther J Jacobs-Stutenpreis and the Listed Hoppings Stakes. In total she tallied seven career wins and seven places and £233,392.
For Owner/Breeder: Kirsten Rausing

ALLEGRETTO sold as a yearling (consigned by co-breeder Airlie Stud) to Cheveley Park Stud for 415,000 gns, winning the Gr.1 Prix Royal-Oak at Longchamp in 2007. This came on top of 2007 Gr.2 wins in Henry II Stakes and Goodwood Cup and 2nd in Gr.1 Yorkshire Oaks. Also winner of Gr.2 Lancashire Oaks in 2006.

The two-year-old STARLIT SANDS winning the prestigious Gr.3 Prix d'Arenberg over 5f at Chantilly . Her third win as a two-year-old. She was also 2nd in Gr.2 Queen Mary Stakes at Royal Ascot. She is a 3rd generation Lanwades' produce.
For Owner/Breeder: Kirsten Rausing

DRAGON DANCER was 2006 Derby runner-up, won the Listed August Stakes at Windsor for loyal Lanwades' client Mr J L C Pearce who purchased him as a yearling for 200,000gns when consigned by Staffordstown at the Tattersalls October Sales in 2004

Half sister to ALBORADA, won the last two of her four races in 2001 at 3 years at Windsor and Bath. Her first foal is 2006 Derby runner-up DRAGON DANCER.
For Owner/Breeder: Kirsten Rausing

Rallies to dead-heat in the LR Aphrodite Stakes at Newmarket, in 2002, having previously gone close in another LR at Newcastle for Owner Kirsten Rausing. She has also been placed third in the LR Galtres Stakes at Doncaster.
Owner: Kirsten Rausing

Wins the LR Berkshire Stakes at Windsor prior to taking the Gr.3 September Stakes at Kempton. Later successes include the Gr.3 Ormonde Stakes.
For Owner/Breeder: Mr J L C Pearce.

Previously a winner of 2 races and £39,000 in England, he re-emerged after 2 years in retirement to win both of his races at Taby, Stockholm, in 2002 by wide margins.

Wins the Gr.3 Emirates Airline Minstrel Stakes at The Curragh in 2002, one of 11 wins from 44 starts, which, with 21 placings, brought him earnings of over £450,000. Three of his wins were at Gr.3 level, while he also won four Listed races, was runner-up in three Gr.2 races and third at Gr.1 level.

(Bred in partnership with Airlie Stud) wins Oyster Stakes LR in 1993. She is now the dam of World Champion ALBORADA and German Horse of the Year ALBANOVA.

WINGS OF A DOVE

Champion Older Filly in Scandinavia, 2002, Lanwades-bred. Winner of seven races in Sweden this year and approx €79,400. She appropriately won the Lanwades Stud Stakes, Taby, Stockholm. In 2003, winner first time out. 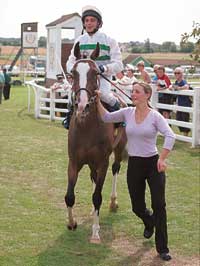 Won first time out at Folkestone in August 2002 for owner/breeder Kirsten Rausing. The breeder had purchased the filly’s grandam Sushila (later a winner at Deauville at 2 and 3, and dam of Petoski) as a yearling at Goffs in 1976. ALTER EGO later placed in Listed company in Germany at three.
For Owner/Breeder: Kirsten Rausing

Wins her fourth race of the season in 2002, the £17,517 Tote Bookmakers Stakes at Musselburgh.
For Owner/Breeder: Kirsten Rausing 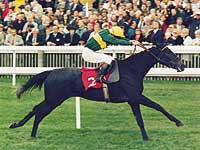 Winning the Rose and Crown Maiden Fillies’ Stakes at Beverley also a winner at Bath in July, 2002.
For Owner/Breeder: Kirsten Rausing

Winner of two races at two years in 2002, including the valuable Stanley Racing Children in Need Nursery at Haydock; also 5th in Fillies’ Mile, Gr.1, Ascot. At three she was 3rd in the Listed Masaka Stakes at Kempton, and Pretty Polly Stakes at Newmarket.
For Owner/Breeder: Kirsten Rausing

Won the Danish Oaks for his Owner/Breeder Professor B. Carlsoo. HERNANDO’s other Scandinavian Classic winner was ROYAL ENGAGEMENT, winner of the Swedish St Leger for Owner/Breeder Mr O.H. Bispelund. Both HERTHA and ROYAL ENGAGEMENT were foaled and raised at Lanwades, St. Simon & Staffordstown. 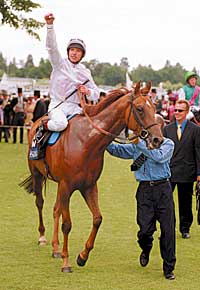 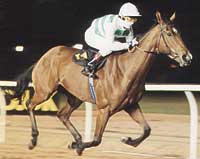 Half sister to German Horse of the Year, and dual Gr.1 winner CAITANO, and to US Gr.3 winner LADY LODGER. Bred by Kirsten Rausing, and shown winning easily by 8 lengths at Wolverhampton.
For Owner/Breeder: Kirsten Rausing